When I was first offered my dream role at an amazing company, I had high hopes for my starting salary. After all, how could a company build such intense employee loyalty and a fun, vibrant culture without paying well? However, those assumptions were quickly met with reality. I found myself living off of a base salary of $40,000 a year in one of the most expensive cities in the United States, while also paying off my student loans. How much in loans, you ask? More than I could pay for if I put all my pre-tax salary towards them. It was a sore disappointment, but living in NYC on a budget was also a compromise that I was willing to make. One year of sacrifice was an easy trade for a role I knew I would love and be able to grow in, not to mention the ability to make connections in a thriving city. So, I got down to business.

My Tricks For Living In NYC On A Budget

I want to start off by saying I would not trade my experience for the world. Living frugally in New York City taught me how simply I can live. I strongly believe that if I had initially been offered a higher amount, I would have adjusted my lifestyle to it so quickly that I would not be able to imagine living on less. Lifestyle inflation is real and something to actively consider. Even though I am long past my first role, I continue to try to live as I did during my first job in New York City so that I can increase my savings and decrease my remaining student loan debt.

While in New York, I learned to prioritize what mattered to me most (like a clean place to live) and skip out on what I used to adore (like an expensive gym membership). Sacrifice forces you to be creative in ways that are quite positive — I love acai bowls, and since I couldn’t afford them often, I learned to make my own versions. Now I’m a pro! And searching for the best grocery prices in NYC meant meeting my true love, Trader Joe’s.

When it came to student loans, I had to face the reality that I wouldn’t be able to pay them down as aggressively as I would have liked, given my budget. However, my industry tends to promote quickly, and I knew growth would be a viable path at my first company. So I committed myself to the idea that I would put all income from future raises towards loans. It isn’t exactly what a finance nerd like me wanted to do, but sometimes, patience is key.

Breaking Down My First Adult Budget

Below, you will see my very first adult budget. I would soon find that I over-allocated for groceries and fun, while I under-allocated for items like transport home (my family and boyfriend lived in Boston while I was in New York) and personal care. I also hadn’t begun to increase my student loan payments, as I did later in the year. For reference, the entertainment/subscriptions category includes my Netflix, Hulu, and Spotify subscriptions for the whole family, as well as my gym and monthly Robinhood deposit. It is also worth noting that I was fortunate enough to be on my family’s cell phone plan, so that monthly expense did not have to be featured. 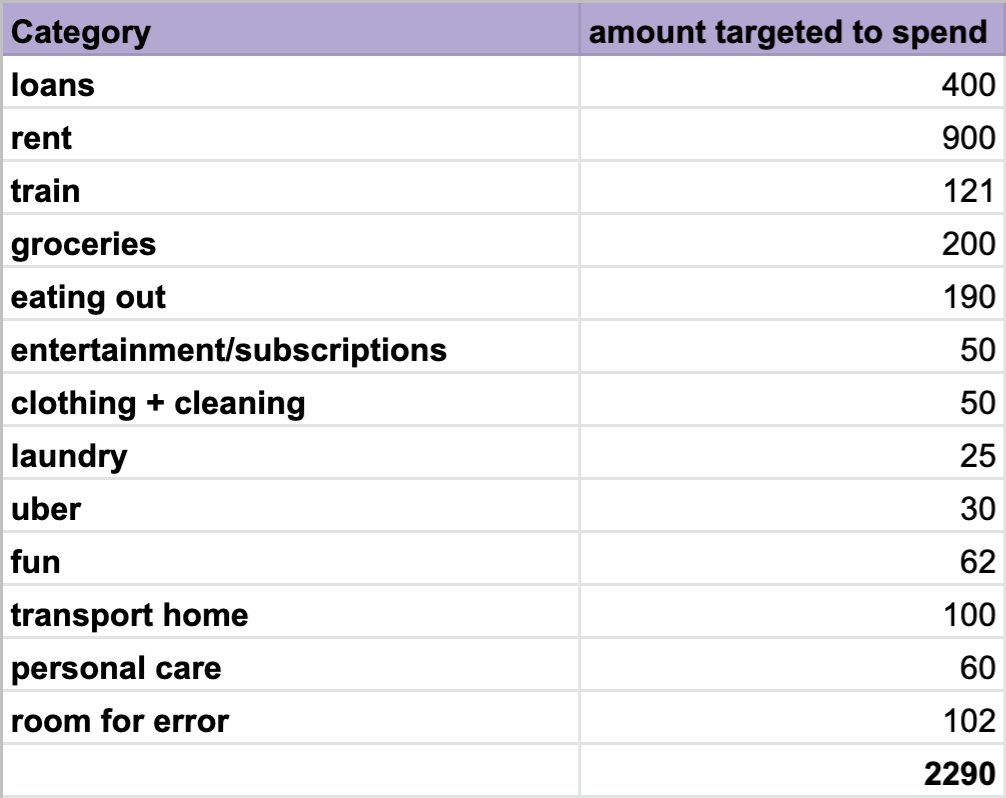 A key component of my survival in New York was readjusting my budget based on my learnings from the last month. Below you will see my end-of-month update after my very first month budgeting. 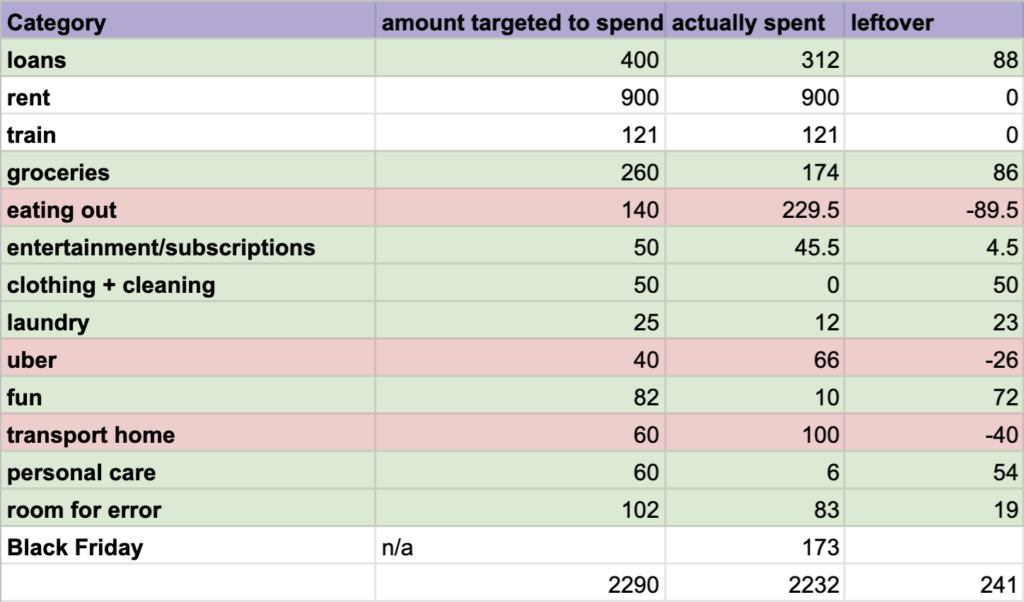 I didn’t plan for Black Friday shopping (looking back on this, I’m so happy I use sinking funds for the holidays now!) and that significantly impacted my budget. I also spent more money than expected on uber, transport home and eating out because I was visiting Boston for Thanksgiving. However, I did find myself saving on my fun category by only spending $10 in the month of November (it was on new fish for my fish tank). My clothing and cleaning and laundry budgets also came in under for the month, though that was mostly due to the fact that I was back in Boston and able to save money by living and doing laundry at home. If you’re wondering why my amount paid towards loans was lower than targeted, it was simply because one of my student loans hadn’t kicked into repayment yet, and I decided to hold off on automating until the next month.

I color-coded each category based on whether I came in under or over for the month so that I had an easy visual representation of what was working and what wasn’t. I love all forms of data, however crude or basic they might be, so this turned out to be both fun and useful for me. Even now, if I am struggling to adjust a category in my budget to a realistic amount, I review my past monthly budget recaps to judge what seems feasible.

An unexpected medical cost did make me acutely aware of just how tenuous my financial standing stood with a $500 emergency fund. After adjusting each category slightly to try to squeeze out extra cash each month, I still didn’t have enough to build up substantial savings.  Since I didn’t feel ready to cut out any of my categories entirely, I began to hunt for a side hustle. Working 9-6 with a 50-minute commute, not to mention going back to Boston at least once a month, meant my options were somewhat limited. I decided to look for on-demand jobs with flexible hours. I eventually started on Rover with the intention of dog walking, but I quickly found that cat sitters were in demand in my area. Why not?

Below you will see my updated New York budget after a few months of fiddling with each category. I frequently struggled with eating out less, but typically came in below by targeted amounts for categories like fun and clothing and cleaning. I also did not include my monthly savings in my budget, because it was based on how much I earned on Rover and could vary greatly. During months with fun holidays such as Thanksgiving and New Year’s, bookings picked up significantly, and I was able to save more. 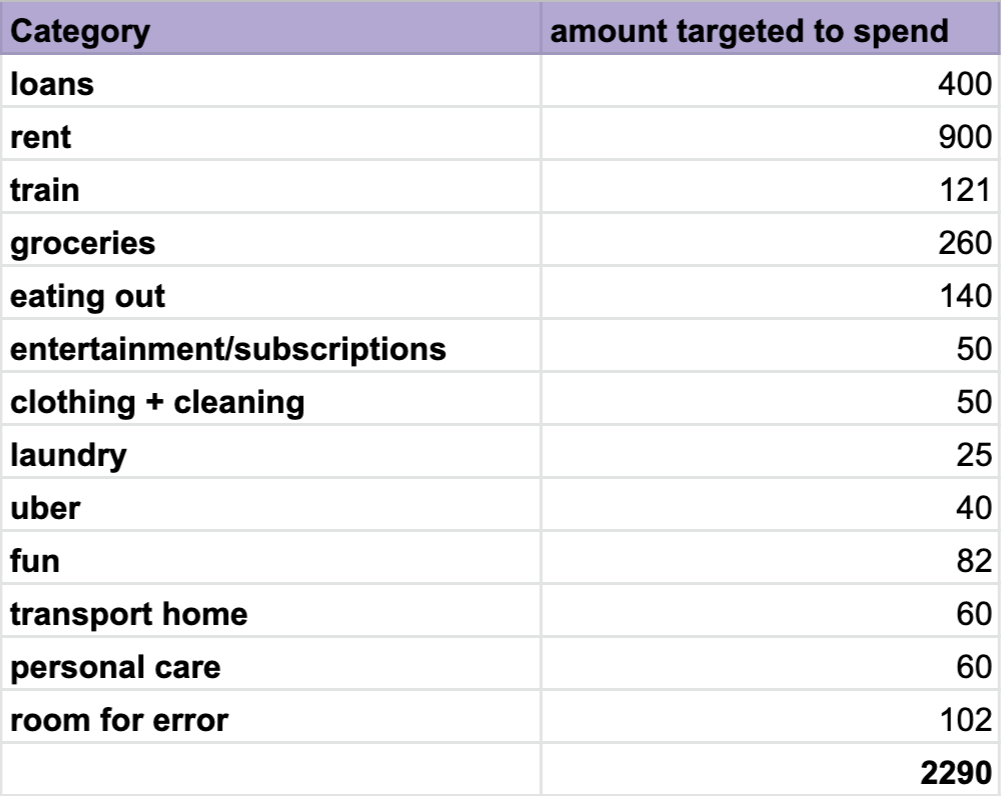 Living on $40k a year in New York City was a valuable experience that I continue to learn from. It has made me more frugal, more empathetic to those around me, and more appreciative of what I have. If you are expecting a similar salary in an expensive city, I hope that my budget breakdown can help you as you plan for the years ahead.

Anna Craven is a publicist and writer from Boston, MA. She loves finance, organization, and most of all, storytelling. You can follow her adventures with her rescue pup, Mickey, here.